Here you will find a brief description of some fantasy books by new authors, as well as the link to the books and/or the author’s site.

The Runic Series (by Clayton Wood)

The Runic series is a contemporary epic fantasy saga set in the world of Doma, where magical engineers called Runics rule the land. They are equaled in power only by Weavers, men and women that can manipulate the very fabric of the universe with their wills. Kalibar is the greatest of the Weavers, magic-wielding soldiers who defend the Empire. Long retired, he is content to spend his final days studying magic in solitude. So when he finds a boy named Kyle bleeding to death on an abandoned road, Kalibar is reluctant to take him in. That is, until he discovers that the boy has incredible magic potential. There’s only one problem…Kyle claims to be an alien from another planet. A planet he calls Earth. With no idea how Kyle got here, and no way to get him home, Kalibar takes the boy under his wing. Eager to train Kyle to use his incredible powers, Kalibar has no time to do it. Lethal assassins calling themselves Death Weavers are trying to kidnap Kyle. Led by a ruthless undead immortal known only as the Dead Man, the assassins plan to use Kyle’s incredible abilities to destroy the Empire. Time is running out…and Kyle may be the only one powerful enough stop the Dead Man. If he fails, the Empire will fall…and Kalibar will suffer a fate worse than death.

The Lady and the Dragon is the story of a dragon who is unexpectedly given a princess as a tribute from the local villagers. While stuck with this puny creature, he learns to appreciate the value of company and friendship.

Windstrider –The youngest of the wind siblings watches a mountain village grow up; yet as the years go by, she learns about the interactions that she’s missing with her brothers.

Johnny C. Vid is  an adrenaline junkie looking to get his next fix. While out looking for a hit, he stumbles into the seedy underground of illegal adrenaline draining and nearly becomes the victim of his own addiction.

In Tears of Stone, a teenage boy lost his family due to an air raid from their land’s king. As he was injured during the attack, he was blessed with magical properties from emerald crystals that implanted into his skin, ths becoming Spliced. However, he soon finds out that he is now a wanted man and learns to live his life while in hiding.

Loop is an intergalactic adventure in which a cadet tries to figure out why their day seemingly keeps repeating.

World’s Collide is the prologue to a larger series that follows a young god’s attempt to explain the delicate nature of the universe.

Find more about this collaborative short story anthology by the members of DragonScript here (the e-book version of this anthology is available as a free download).

The Songs of Peter Sliadek (by Henry Lion Oldie)

Traveling over many roads is Peter Sliadek, the wandering minstrel. Peter’s greatest gift? The ability to listen to people. It’s his unique talent and his fateful journey; the heavy cross he bears. Time after time, he listens to the confessions of the people he meets. A highway robber, a magician’s apprentice, and a naive young girl play a literal game with fate – and try to win. A monk and a judge whirl about as opposite poles of a single duality. A genie appoints himself as the angelic conscience of a duplicitous merchant. The son of a fencing master fights swords with words and words with swords. The gauntlet of a wizard knight crawls through the palace chapel at night. The elusive Anika the Warrior fills mercenaries with terror. And finally, Death himself offers Peter a chance to play in the Last Game.

The plot of each novelette relates to a country to which Peter travels: Poland, Germany, Italy, Ukraine, and the Asian world with its florid tales and customs. Cassandra, Khoma Brut, the Borgia, Vlad Tepes, and Michelangelo are characters of alternative history Peter meets during his travels from one country to another one. Together with Peter, you can visit the radiance of Venice, the evil Black Wallachia, the cursed island Montecristo, and the free town of Guldenberg. Each place has its stories and miracles… And skeletons hidden in the closet.

Henry Lion Oldie” is the joint penname of Dmitry Gromov and Oleg Ladyzhensky, both renowned science fiction and fantasy co-authors from Ukraine. The novel, THE SONGS OF PETER SLIADEK by Henry Lion Oldie, consists of 12 novelettes (177,890 words). From 2004 to 2011 the book was published six times (Moscow, Russia).
In 2012, the novel was translated from Russian into English by Irina and Michael Pevzner (Israel) and proofread in 2013 by volunteers from Canada: Ekaterina Kimaeva, Anna Kimaeva and interns from DePaul University in Chicago, USA: Avery Cunningham, Kevin Sterne, Jessica Olson, Katrina Haritos, Maureen Monahan, Hannah Bender, Lily Felsenthal, Sarah Lovinggood, with Melissa Bikichky as an associate editor. The cover illustration was done by Vladimir Bondar (Ukraine). The cover design and book trailer were developed by Bronya Gromova (Ukraine). The edition includes 45 inside black-white illustrations by Alexander Semiakin (Ukraine). The novel “The Songs of Peter Sliadek” received the “Sigma-F” Grand Prize at “Sigma-F Conference”, Moscow, Russia, 2005. The novelette “I will Repay” from the cycle of The Songs of Peter Sliadek received the “Portal” award at the “2nd International SF & Fantasy Assembly of Portal”; Kiev, Ukraine, 2005. 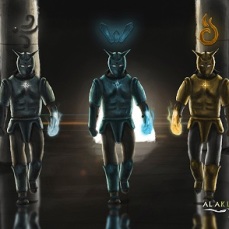 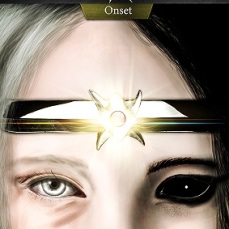 “It has been nearly two decades since Pell Wendt abandoned power and prestige of Collum. Ruled by the semi-divine Ajudicar, the city had been his home all his life, but no longer. Spurned by the woman he loved, the former pathfinder, adventurer and criminal walked away from his life of escorting promising youngsters to the shrines of power, and retreated to his farm in the Sogras, to live a life of bitter and brooding rejection.

Now, House Kettiburg has reached out with a an offer he can’t refuse: a pilgrimage to Skara, a mythical and dangerous shrine far out in the barbarous Outlands, for the supplicant Keilie – the daughter of the very woman who rejected him.

Trapped by the love his heart cannot deny, Wendt agrees to the pilgrimage and finds himself embroiled in intrigue and betrayal, with far-reaching implications for himself, Keilie, and the tattered remains of the human race.”

Legend of the KhiMara series (by Glenn E. Smith) 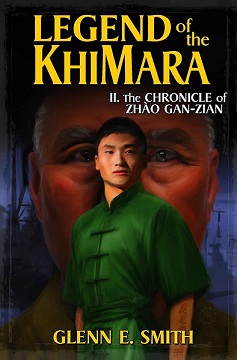 “A few centuries ago, on an Earth much like our own…

More than a thousand years ago, rare gems known as KhiMara served as sources of great magical powers for those gifted few born with the ability to harness their energies…according to legend. Now, his wife having been murdered and his young daughter having been cursed by the ancient warlock NaRhumas, Anteri Vasdegahm, former Captain-Major in the Portuguese Republic’s Navy, now a privateer, searches for one of those legendary gems with the hope that when he finds it, he will then be able to employ a practitioner of the ancient dark arts to have the curse lifted from his daughter forever. Unfortunately, not all ancient dark magic is benevolent.” 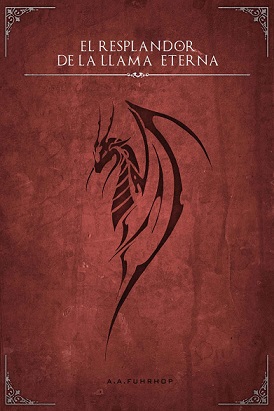