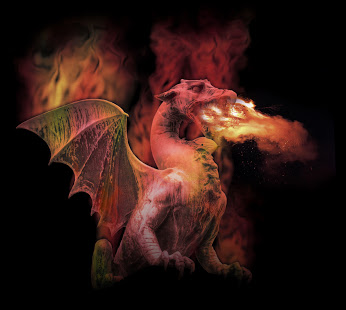 An unusual deal between a dragon-slayer and his prey – a dragon! Perfect for dragon lovers! Check more stories by Jason Nugent here on his blog:

A Dragon’s Bargain (by Jason Nugent)

“Keep moving!” the knight shouted. Dragus listened and watched carefully. The knight in rough silver armor led a man in chains through the forest. Dragus was almost caught bathing but at the last minute he heard the chained man scream and that gave him the heads up he needed to hide. Now watching the pair trudge through the forest, he thought he recognized the chained man. His eyes narrowed as he stared, his nostrils grew large as he searched his scent.

Then the sensation overwhelmed him. Anger, fear, disgust all washed over him like a bath of evil. His eyes shot open. He knew the man. All dragons did. He was the Dragon-Slayer,  friend of man and bane of dragons. He was feared and hunted by dragons and now Dragus had him in his sights. Smoke swirled out of his nostrils, his anger stoking the flames within. Flexing his wings, he shot high in the air and with a great roar, Dragus swooped down ready to exact the furious vengeance of his race.

The dragon’s roar made both men look to the sky. Dragus bellowed loud. Fire belched forth from his mouth, trailing behind him. His giant leathery wings beat a rhythm of death in the air.

“By the gods! A dragon!” the knight holding the chains cried. The Dragon-Slayer tried to run but the chains held him back.

“Come on man, let me out of these bindings! He’ll kill us both!” the Dragon-Slayer said.

Dragus made a pass at them, breathing a line of fire in the forest alongside the men. The bright orange and red flames ignited the dried timber and soon a wall of flame trapped the men.

“Can you kill it Dragon-Slayer?” the knight said. He roar of the flames grew louder around them.

“Release me from these chains and I have a chance. Quickly! He’ll be coming back!”

Dragus circled above them, roaring and shooting long bursts of flame from his mouth. His chance at vengeance sent him in a frenzy.

“By the gods, kill it Dragon-Slayer. I release you!” the knight said. He unlocked the chains and thrust a sword in the hands of the Dragon-Slayer. Before he could turn away, the blade sliced through the air separating his head from his body.

“No man takes Aydan and lives,” the Dragon-Slayer said. The knight’s head rolled away from the force of the blow.

Dragus observed the men fighting and watched as the Dragon-Slayer betrayed the other man. The time was right. Alone with the Dragon-Slayer, he dropped from the sky intent on killing the bane of his kind.

A roar above made Aydan look up. Dragus breathed mighty flames towards the man. With his claws outstretched he exhaled a deep red flame but not far enough to injure the Dragon-Slayer. It was meant as cover so he could catch him in his long yellow talons.

The Dragon-Slayer cowered from the flames and Dragus plucked him off the ground. The man screamed obscenities at the dragon. Dragus roared and spit flames in front of him. Aydan struggled but the talons kept him from moving.

Silver arrows pierced the dragon’s wings. Dragus cried out in pain. His wings smoked where the arrows struck. Volley after volley of the deadly silver arrows fly towards him from the forest below.

“Ha, that’s it dragon! That knight’s guard knows your weakness! Die dragon! Your head will look spectacular mounted on my wall.”

Dragus spun in the air. Arrows stung his large wings. When Aydan taunted him, Dragus clung tighter to his prey.

“That’s it dragon! Try and kill me! Use your energy on me while the arrows pierce your flesh!”

The arrows forced Dragus to the ground in a great crash. His claws were like a harness protecting Aydan who was freed from the talons when he struck the ground. Dragus roared as he tumbled across the forest floor striking trees with his tattered wings. He collapsed against a tall oak. Smoke rose from his nostrils. After a few moments, Aydan approached the wounded dragon with his sword at the ready. Dragus opened his eyes and pushed himself off the ground.

“I need you Dragon-Slayer,” Dragus said in a weak voice.

“Why would I help you?” Aydan said, “you do nothing but destroy our lands. You’re a menace that must be eliminated.”

Dragus collapsed on the ground unable to fly. Dark thick blood oozed from his pierced skin, smoking as it struck the ground around him. He tried raising his head to look at the Dragon-Slayer but was too weak to move.

“I need your help Slayer. I will die if you do nothing.”

“Precisely! That’s the point dragon. You will die. I am the last true Dragon-Slayer. My name is Aydan. You’ll go to the hell that spawned you knowing the great Aydan slew you.”

Dragus turned his head. “Aydan, you must save me. You cannot kill me.” The dragon coughed, small balls of flame shooting forth from his mouth and dissipating just as quickly.

“You’re mad dragon! I kill beasts like you, not save them. I have an entire hall of trophy heads of your kind. There’s a spot left for you.”

The dragon struggled pushing himself up and fell back to the ground. Smoke puffed from his nostrils

“Aydan!” he said, his voice booming despite his weakened condition. “You must save me! It is in your best interest to do so. When I die,” Dragus said. He coughed and wheezed, life clinging like a stubborn tick.

“My best interest?” Aydan laughed. “Dragon, that’s not the craftiest line I’ve ever heard from your kind. Go and die. Our lands need a reprieve from your destruction.”

“My life spares you from damnation Aydan. As long as I live, you will not taste the sting of a sinners death.” His eyes closed and his chest heaved. The energy of speaking exhausting him.

“Die already dragon! I tire of your chatter,” Aydan said.

Dragus opened his eyes and turned his head, the effort straining him. “Insolent fool. You know it’s true. Your dreams of death. The wailing and torture. That’s no dream, it’s your future if I die.” The dragon closed his eyes inhaling deeply. “The black pit, the never ending suffering awaits. Your actions against my kind have condemned you.” He inhaled again and lay motionless. For a moment Aydan thought he was dead. The dragon let out a long breath, groaning in pain. “Search yourself Aydan. The truth is as I speak. And if I die, nothing prevents you from it.”

Aydan wrinkled his brow. The dreams the dragon spoke of haunted him for months. Most nights he wished for rest but was cursed by the horrific images.

“How do you know this dragon?”

Dragus inhaled before speaking. “I am the gate. Through me you enter obliteration or paradise. If I die your choice it made and can never be undone.” The dragon wheezed. Aydan could see how much pain the dragon was in. “But if I live, if you share just a drop of your blood with me, I can escort you to paradise. But hurry Slayer, my life flickers.” The dragon lay motionless on the ground, his blood boiling under him, smoke rising up all around.

Ayden hesitated. “What if your words are false? How do I know you’re true?” Dragus coughed, his body losing strength with every passing moment.

“The dreams Slayer. Search yourself,” Dragus said, his voice now a low rumble.

With his dagger, Aydan sliced his arm drawing blood. The bloody dagger was thrust towards the dragon’s mouth and he dropped some of his blood on his tongue. When he did a bright flash consumed the dragon, blinding Aydan. When the light winked out, the dragon sat before Aydan full of life.

“Thank you Slayer,” Dragus said. His voice was deeper than before without a hint of weakness. Aydan held his sword in front of him.

“I saved you. I expect you’ll keep your word dragon! We have a bargain.”

Dragus sniffed the air. The scent of the archers nowhere to be found. He and Aydan were alone. He exhaled dark gray smoke from his nostrils. “Aydan, a dragon keeps its word. Always.”

Large heavy wings unfolded behind Dragus. He rose in the air, snorting smoke and fire.

Aydan howled when the flames engulfed him. Scorched flesh sizzled in the intense heat. Dragus roared his victory, the sound echoing throughout the forest. Aydan fell to the ground in a blackened heap of ash. Dead.

Dragus shot upwards, circling around the charred body. “The only trophy we need! The arrogant Slayer no longer a threat. And his paradise of wailing awaits. With the Slayers blood running through my veins, never can man slay dragon again. Never!” Dragus snatched the smoking body and flew fast across the forest, free and alive. The rest of the horde would soon share in the victory and dragon-kind would once again rule the land.

If you enjoyed this story, you may also want to take a look at the author’s work (Almost) Average Anthology: tales of adventure, loss, and oddity. 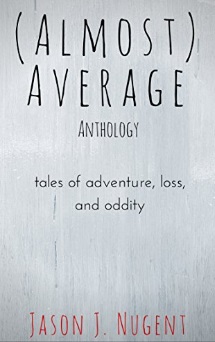 “An anthology of flash fiction collecting sixteen original stories in one volume. “Maniacal creatures, deadly aliens, and strained relationships reveal the darker side of life through tales perfect for the reader wanting adventure in bite-sized stories. Touches of horror, science fiction, and fantasy weave through the anthology from the opening line of “Sebastian (I Am Death)” to the closing words in “The Long Sleep.” This debut anthology offers the reader a variety of stories with twists and unexpected turns. Featuring the story “Sunshine and Asteroids” as read on episode 48 of the No Extra Words podcast and two previously unreleased stories only available here, this anthology of dark stories is the first offering of author Jason J. Nugent.”

Working on some projects, looking for good stories. View all posts by aurosjnc

2 thoughts on “A Dragon’s Bargain (by Jason Nugent)”