Even to these days, dragons in China are commonly regarded as benign symbols that were associated with rain, water sources and power. Chinese dragons typically appear as a blend of the physical attributes of several different creatures: the body of a snake, the antlers of a deer, the scales of a carp, and the paws of a tiger are some of them; thus, the Chinese scholar Wen Yiduo proposed that the combination of all of these animals represented the political assimilation of different tribes who had a different animal as their totem (1). However, dragons were depicted in art much earlier than any such significant union of the early Chinese communities could have existed, and they did not include all this complex assembly of animal body parts yet.

But then, how did dragons first appear in China? Well, even though there does not seem to be any conclusive evidence on how or why these fantastical creatures were conceived in the psyche of the early inhabitants of the region, archaeologists and historians have unearthed a few clues that might help us trace the origins of the Chinese dragon.

The image of the dragon as an ideological phenomenon emerged during the first phase of the Jade Age around 3500-2300 BC in the Hongshan cultural period. Hongshan settlements occupied the area stretching from the Liao River in southeastern Inner Mongolia to northeastern Hebei, Liaoning and south central and western Jilin provinces in China; in the 1970’s, excavations at the Hongshanhou site in Liaoning province retrieved an important number of sophisticated jade (nephrite) sculptures, one of them being the so-called “pig-dragon” (Figure A), as archaeologists have labeled it (2). The name derives from the features of its face, which is similar to a pig or a boar, and its curling body that reminds us of a snakelike dragon. This pig-dragon has a pair of earflaps on its head, circular eye sockets above tear-shaped nostrils and jaws with opposing upward and downward pointing tusks; it has a hole in the middle so that it can be suspended from the neck, its tail and head remain connected by a narrow slice of jade, and it seems to be coiled in fetal form (3).

The basic traits of this dragon reappear in the C-shaped jades of the Lower Xiajiadian culture (2600-1600 BC), as exemplified by the Sanxingtala dragon jade (Figure B). This dragon has a rather narrow coiled body, long tear-shaped eyes, a closed mouth with no tusks, and its tail is no longer connected to its head. The earflaps are replaced by a ribbon or feather-like extension sprouting from its neck. Nevertheless, the basic embryonic form of the dragon still survives in this piece as well as in other similar examples, a motif that is also present in the artistic manifestations of dragons well into the Longshan period (3000-2000 BC) as demonstrated by some of the jades and ceramic works of the time (Figures C and D). 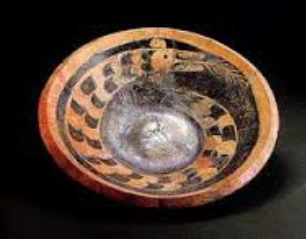 It is also noteworthy that the Late Shang era (1600-1046 BC) logograph for qiu 虯, “dragon”, in some oracle bone inscriptions from the late Shang period (1600-1046 a. C.) has the distinct shape of the pig-dragon and its subsequent variants, meaning that by this time the dragon had finally been incorporated in the mindset of the people of the time as an ideological entity (4). Now, this still does not tell us much about the mythical nature and significance of the early Chinese dragons, but a closer look at the jade pig-dragon and the sites where these jades were found might prove useful.

Dragon jades were commonly found at elite male tombs at chest level, so it is highly likely that Hongshan chieftains wore them for display, which endowed them with mythical power (5) —though it is worth mentioning that the pig-dragon was not the only heraldic symbol among them: other animals and symbols that also served this purpose were found inside the tombs. Similar jades were also found in ceremonial sites of a different nature, such as the Niu I “Goddess Temple” at the Niuheliang complex in Liaoning Province, Northeast China. Large scale ceramics of animal parts with the head of the pig-dragon and some raised reliefs that refer to the form of the pig-dragon jades were found in the main chamber, together with the remains of female figurines depicting women in a seated or cross-legged posture (6). Similarly, at the Dongshanzui site in the counties of Kezuo and Lingyuan archaeologists found jade works of art in the shape of two-headed dragon near a circular platform with ceramic torsos of pregnant women (7). Therefore, it is possible that the dragon may have been somewhat connected with fertility or fertility deities.

Under the light of these facts, we can analyze the symbolism behind the “pig-dragon. In the first place, we can see that the pig-dragon was regarded a heraldic symbol of power by the Hongshan communities, so it should not strike as surprising that this attribute has lingered within the image of the dragon to the point that it has been traditionally associated with Chinese monarchs —emperors such as Qin Shi Huang (Figure F) and Zhu Di are often portrayed wearing robes with dragon motifs, and the imperial flag of China displayed an azure dragon on a yellow field. 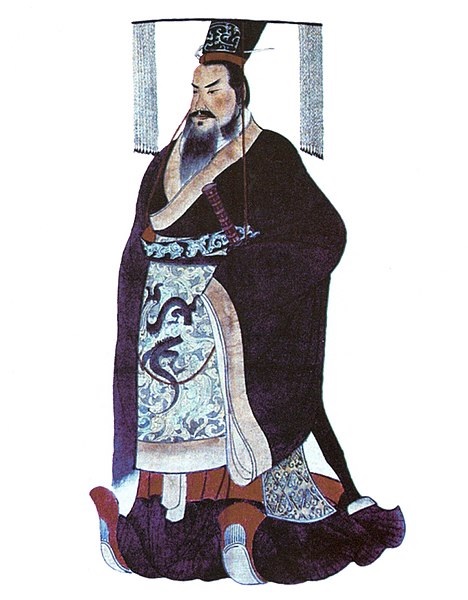 The link between the dragon-pig and fertility is the second aspect we must analyze. Remains of pigs and wild boars are more common than those of any other animal in late Neolithic burials in China, so these creatures may have been associated with the agricultural needs of those early settlements (8); furthermore, there are references in Han art and classical texts that link the boar with thunder and rain (9), this last phenomenon being of utmost importance for growing crops and farming. If we combine the symbolism of the boar with that of the snake, a creature that was associated with river deities (10) and with water in the philosophical system of Wu Xing, we actually obtain the basic ideological and physical features of the dragon pig, and perhaps for all later dragon representations. The embryonic, C-form of the dragon-pig might also suggest an additional relationship with fertility (we have previously mentioned that dragon jades and ceramic figures of fertility goddesses were found at certain Hongshan temples), but that assumption is only based on superficial observation since there is no way to prove that that was the intended purpose of the artists who made them. In any case, it seems logical that these characteristics match the Chinese dragon as well as its legendary attributes as a supernatural being with the power to control water, typhoons and rain.

It is interesting to note that, despite its unique traits, this dragon-pig also shared certain similarities with its early Mesopotamian counterparts: both were associated with water, fertility and power, both embody part of the mythical symbolism of the snake, and both were first represented in art in almost the same time frame (3500-2000 BC). However, we cannot yet determine whether this was just a fascinating happenstance or a possible byproduct of cross-cultural exchange between merchants or travelers who might have reached distant trade routes.

As we have seen, the dragon-pig was the first guise of the legendary long, which would carry the figurative eminency of its predecessor as a regal symbol. Of course, there is still much more that can be said about the evolution of the image of the dragon in East Asia, yet I promise I will address this topic in the future.

Working on some projects, looking for good stories. View all posts by aurosjnc